For evaluating the global state of the atmosphere and providing indications about changes in the average concentrations of atmospheric compounds and their variability, it is necessary to carefully investigate the tropospheric background conditions. Usually, by these terms, we refer to the properties (physical or chemical) of the atmosphere in a given area, representative of large spatial and/ or temporal scales and not influenced by direct anthropogenic emissions. Only continuous observations in background conditions can provide reliable information on long-term variations of the tropospheric properties, also representing a valuable resource for early-warning purposes. Thus, continuous monitoring of trace gases and aerosol properties in background conditions represents a fundamental activity for understanding the anthropogenic and natural processes influencing the tropospheric properties. For mountains are often characterised by large ‘‘areas of representativeness’’ and by ‘‘clean’’ conditions, these locations are considered useful for studying the background of the troposphere. Moreover, under specific circumstances, at these measurement sites the monitoring of trace gases and aerosol properties can also provide reliable information on pollution levels in the ”free” troposphere (i.e. the troposphere not directly influenced by the interaction with the Earth’s surface), which is known to be affected by horizontal and vertical transport of polluted air masses. At ICO-OV, several long-term continuous programmes are running to better characterise the background conditions of the Mediterranean Basin/southern Europe. These areas are considered a major crossroad where air masses having different origins and being characterised by specific trace compounds can strongly impact on the atmosphere, thus influencing its background composition and radiative budget, as both mineral dust from North Africa and natural and anthropogenic pollutant emissions (from local-scale to long-range) are able to do. Measurements of trace gas concentrations (O3, CO, CH4, N2O, SF6, CFCs, HCFCs, HFCs, H2, total O3, NO2 vertical profiles), irradiance (UV and solar radiation), natural radionculides (7Be, 210Pb), along with aerosol physical (size distribution from 50 nm to 20 μm, equivalent BC concentration, scattering coefficient at 525 nm, PM-10 mass concentration) and chemical properties (organic and inorganic composition of fine and coarse aerosol) are carried out at ICO-OV. 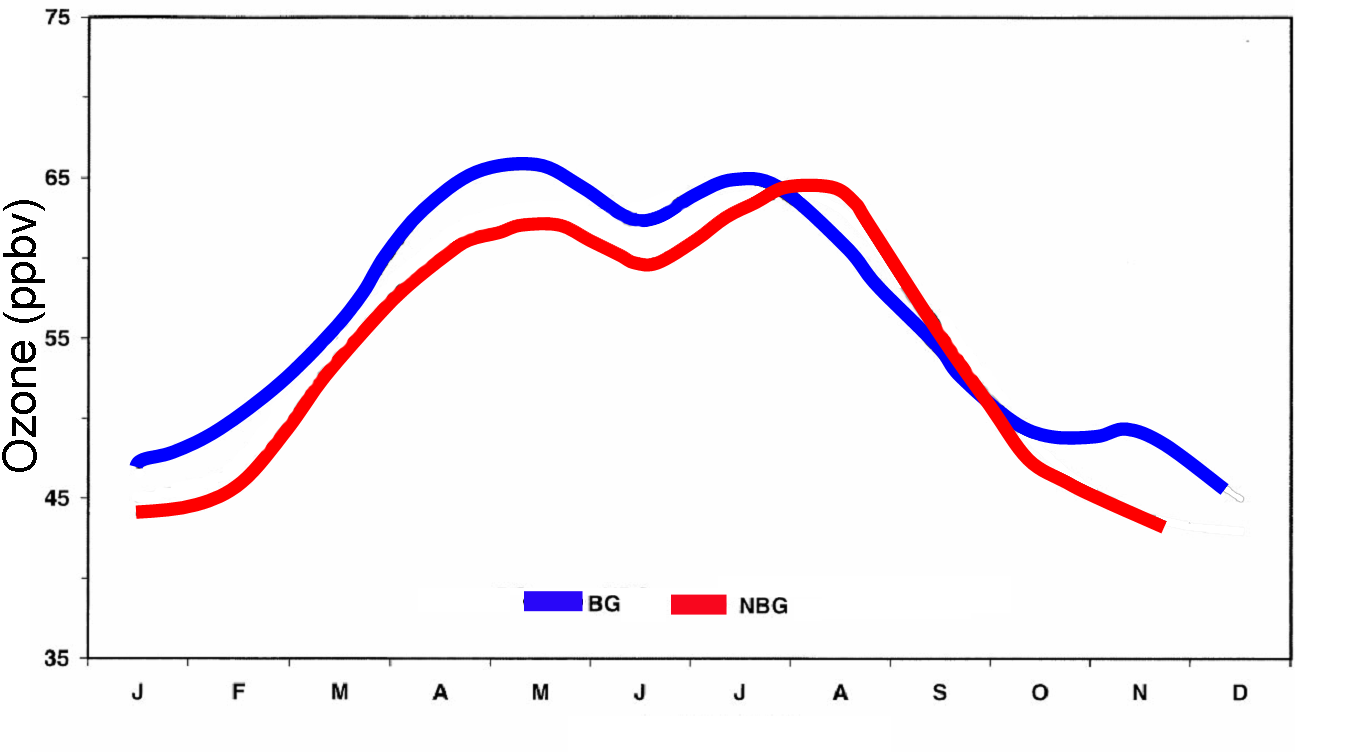 This allows to investigate the influence of transport processes (e.g. stratospheric air-mass intrusions, mineral dust and pollution transport phenomena) to the variability of the background tropospheric conditions. Moreover, thanks to the implementation of a near-real time monitoring technology, the observations carried out at the ICO-OV can be profitably used in activities of early-warning. As a recent example, the aerosol physical properties observed at Mt. Cimone allowed the exact detection of the volcanic plume connected with the explosive eruption of Eyjafjallajökull (Iceland) over North Italy (see below).

Temporal variations of ozone, coarse and accumulation particle concentrations and absorption coefficient at the ICO-OV during May 2010. The grey shadow indicates the occurrence of the Eyjafjallajökull plume detected on 19-21 May 2010. The insert shows the origin and path of air-masses reaching Mt. Cimone on 19 May 2010, as deduced by the HYSPLIT model analyses (http://ready.arl.noaa.gov/HYSPLIT.php)